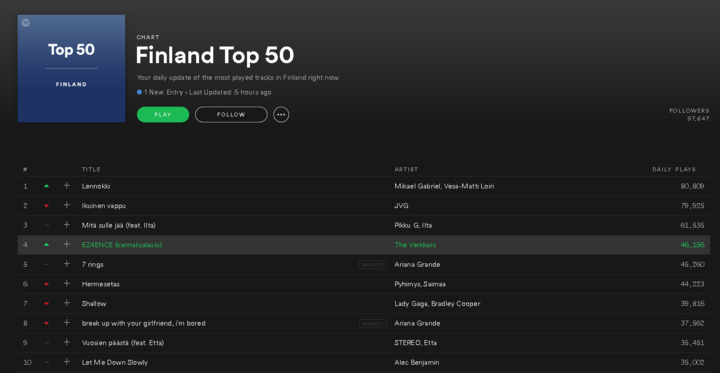 The past weekend saw the conclusion of the latest Counter Strike Major, which features the top teams in the world fighting it out for a share of a $1,000,000 prize pool.

I won't spoil who won it, but there was a notable surprise package: The all Finnish line up of ENCE, who qualified for the main event earlier in February with a 3-1 score.

ENCE have somewhat of a cult following, who maintain that every match for the team is "EZ4ENCE" (Easy for ENCE), and one devoted musician even made a song to accompany it.

With their success, the song launched up to 4th in the Finnish charts!

Will we see more Esport-related songs hit the charts soon in a similar fashion to World Cup themed songs?

I may be wrong, but I don't think we will see many esport related songs on international top charts. The convergence of esports fans that are really talented music makers must be too small. 🙂

This is surprisingly catchy! Good on them for making it so high up the charts!

All the best, Leia

#1 Perhaps the fandom around these songs will carry them! For example I don't think this artist was particularly big. Maybe someones career will launch off one of these types of songs... who knows!